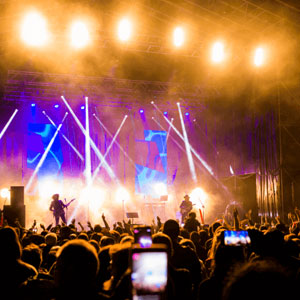 India has witnessed a growing demand for live and entertainment events over the last decade. This is because people have transcended the previous era of screen-based viewership and have come to realize the live spectatorial flavors of the entertainment industry.

Additionally, the notion of connectivity and common networking has led similar grounds for people coming together to watch a live entertainment show. As a result, this segment of the event industry has gained wide popularity among Indians. For example, the consumer’s choice of preferring a live screening as compared to watching it digitally at home.

More to this, other entertainment festivals such as Sunburn, Supersonic, film and television award functions attract massive audiences. In fact, the Sunburn festival experienced a significant growth rate, adding 3 lakh new consumers as attendees of this famous show.

Other events such as the Grub Fest, the Joshua Tree Tour 2019, screening of Marvel's Avengers etc has brought diverse communities to enjoy these shows together. And now, besides the tier I cities, tier II and tier II also emerge as active markets for facilitating entertainment to the masses. This has further led to extensive globalization and mobility across cities, states and even countries. Thus, the live and entertainment events industry has transformed the globe into a single market. Or else put it, globalization of the event industry pivots all players to exercise their versatile role in this developing market.

In short, this scope of growth produces an enticing impact on aspirants willing to opt for this segment of the industry. So without a second thought, the live and entertainment segment is a worthy and commentable option for newbies to explore and expand this industry in future.

India records a substantial growth in this specific segment of the industry. This is mainly because of the rising business networking among age-old companies, new start-ups...

The segment pertaining to corporate event management comprises the scope of unleashing one’s creative potential amid a professional setting. In other words, it emphasizes on the contretized training...

The event industry organizes marketing and promotional activities to capture a decent market for their products on display. The scope of such events is to mindfully lure customers to purchase their products...

In addition to wedding and live and entertainment events, social events too exercise a unique position in the event industry. Existing as a blend of cultural and public events, sociale events aim to revolutionize...

In India, the Wedding Management Industry is one of the most flourishing endeavors in this organization. This is mainly because weddings are auspicious ceremonies...